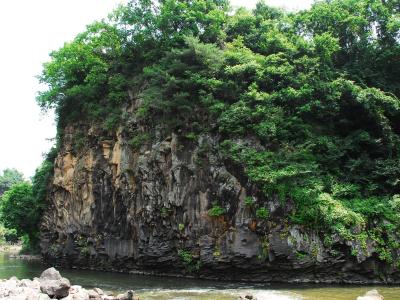 Daegyocheon stream is a branch of Hantangang River, which is called gorge due to its narrow and deep valley with total length of 1.5km. The gorge is bed from with width of 25m~40m, height of about 30m formed by excavation and corrosion. It features various columnar joint with various types of topography formed by flowing water on basalt plains. This place is academically significant in understanding the fourth geological features and topographic development of Korean peninsula. Basalt and lava bed from both side of gorge is very thick, which has influenced developing various joints such as column shaped columnar joint, horizontally splint planticular joint, fan shaped radial joint. In the Hantangang Daegyocheon Basalt Gorge, the place where shamans held rites is located, and the radial joint in fan shape which is quiet rare is named "Fan Boulder" by its shape.